A plan to reduce plastic bag usage has turned out differently than the originators had planned.

In June, the East West Market in Vancouver, BC, rolled out plastic shopping bags with three different logos: “The Colon Care Co-Op,” “Dr. Toew’s Wart Ointment Wholesale” and “Into the Weird Adult Video Emporium.” Shoppers who needed bags for their groceries but didn’t bring their own reusable ones would then be charged 5 cents for each bag with its embarrassing logo. 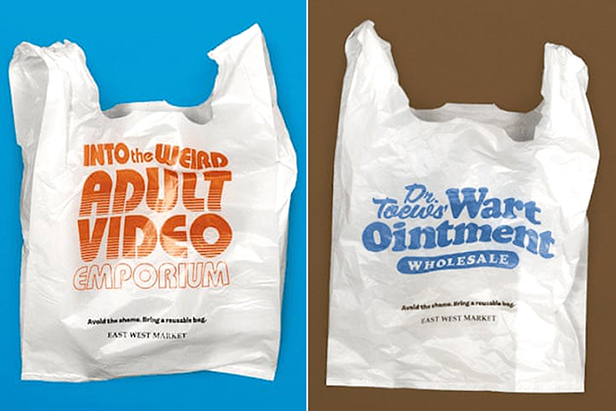 The goal, according to store owner David Lee Kwen, was not so much to shame as to encourage shoppers to bring their own reusable bags and to start conversations about reducing plastic waste.

But the bags became so popular that consumers came to shop without reusable bags just to collect the different plastic ones. However, Kwen is still positive about the results of the experiment. In fact, he has plans to get the logos printed on reusable canvas totes.

“The underlying thing is that it creates conversation, and that’s what we actually wanted to get across to the general public,” he told NPR.

Also in June, Prime Minister Justin Trudeau announced plans for a nation-wide ban of single-use plastics by 2021. “To be honest, as a dad, it’s tough trying to explain this to my kids. How do you explain dead whales washing up on beaches around the world, their stomachs jam-packed with plastic bags?” Trudeau said at the time. “As parents, we’re at a point when we take our kids to the beach and we have to search out a patch of sand that isn’t littered with straws, Styrofoam or bottles. That’s a problem, one that we have to do something about.”

While Vancouver has yet to implement an official plastic ban, Starbucks did announce last summer that the city would be the first of two (along with Seattle) where they would cease supplying plastic straws by 2020.