Every June, the global LGBTQIA+ community holds special events to commemorate Pride Month. From parades and street parties, to poetry readings and educational sessions, millions of people take part, and participating communities and organizations continue to look to branded merchandise to raise awareness and show solidarity.

Among the many events taking place during Pride Month, New York City is home to one of the world’s largest. NYC Pride hosts events throughout the city in June, culminating in the annual two-mile Pride March the last weekend of the month. This year, an estimated 4 million people turned out to cheer on the marchers, including floats designed by major global brand sponsors like Smirnoff, Target, Comedy Central and the NBA.

Last week, the Big Apple was also the first American host city of WorldPride, a global LBGTQIA+ event, in commemoration of 50 years since the 1969 Stonewall Riots. In June of that year, demonstrations broke out in the city to protest police harassment after a raid on the Stonewall Inn, a gay bar in Manhattan. Since then, the event has traditionally stood for the starting point of the current gay rights movement.

For this year’s March, sponsor Salesforce created a double-decker bus with a design that evoked the façade of the Inn, now a National Historic Landmark.

Of course, attendees in New York City took home a ton of Pride-branded swag from brands eager to be aligned with the cause, including Liquid Pearl Shampoo and Conditioner from hair care brand OGX Beauty, specially labeled Pepsi bottles, zipper cases from dating site Bumble, stick flags and lanyards from TD Bank and co-branded maps and guides, all in a cotton tote bag from T-Mobile, the event’s largest corporate sponsor. 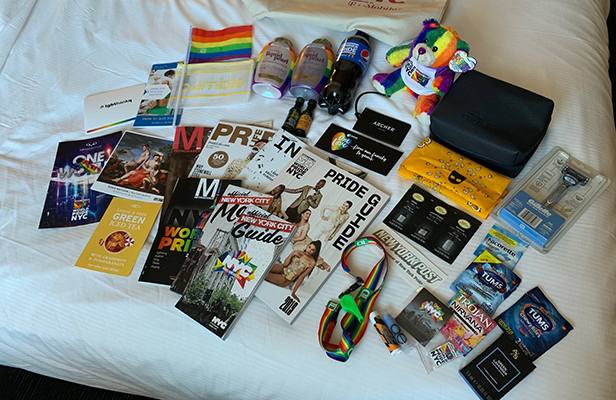 Top 40 distributor Axis Promotions (asi/128263) in New York City has seen increasing demand for Pride items from clients. Johanna Gottlieb, senior branding specialist at the company’s Chicago office, has worked on Pride-themed orders for events in Chicago, New York City and California, particularly wearables like bandannas and T-shirts. She recently collaborated with Studio Three, a boutique fitness facility in the Windy City, to design Pride T-shirts that the staff wore during classes and sold as merchandise. 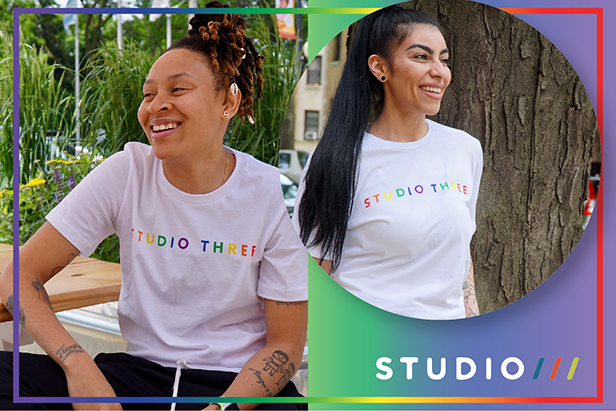 Axis also did a temporary rebrand for J.MAK Hospitality, which ordered “J.MAK Personality #gaymak” T-shirts and gave them out at special events at the company’s 1 Hotel in Brooklyn, NY. And Axis supplied The New York Post, a Platinum Media Sponsor for NYC Pride, with “PRIDE” tattoos in rainbow hues that were distributed at the sponsor’s booth during the March. 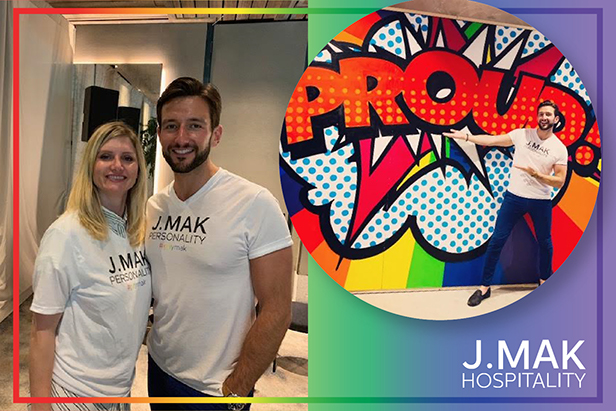 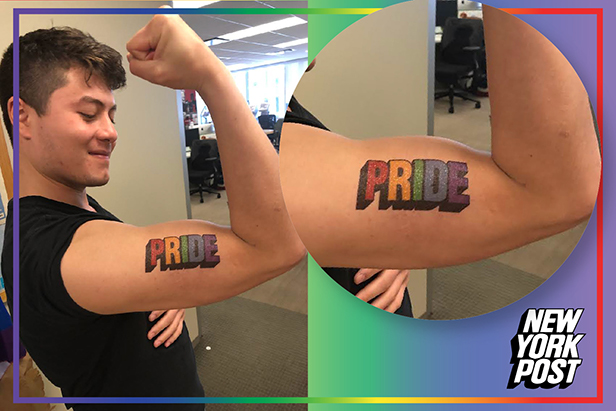 The New York Post, a Pride March sponsor, ordered tattoos from Axis to give out at its booth during the parade.

“We have companies giving out Pride items and they’re posting on social, ‘We’re at this corner on the parade route. Reach out your hand for a T-shirt!’” says Gottlieb.

Harper+Scott (asi/220052), also in New York City, did several projects for clients looking to provide merchandise during the Pride March. CoverGirl sold specially branded drinkware in its Times Square location and Wells Fargo gave away “You are empowerful” themed T-shirts. 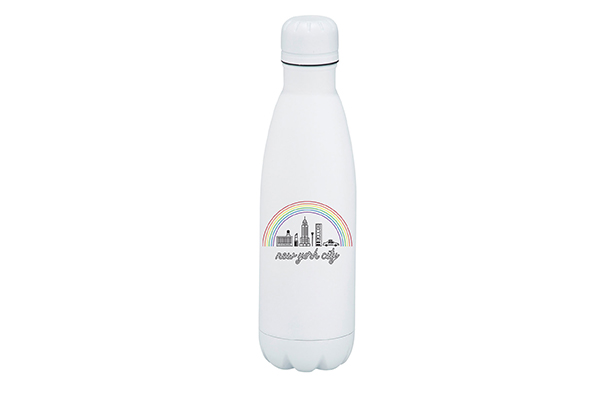 Harper+Scott helped CoverGirl design these water bottles that were sold at the cosmetics company's Times Square location during the Pride March. 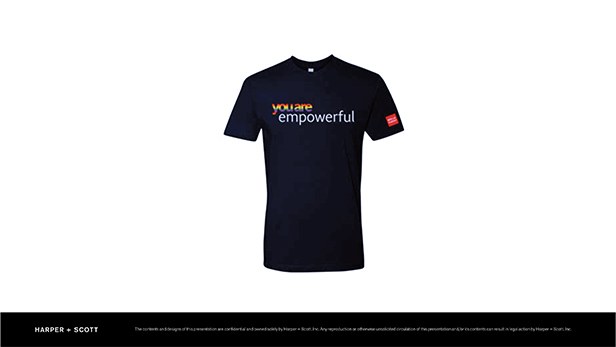 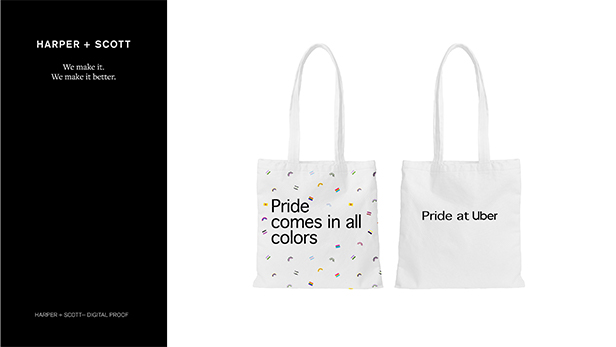 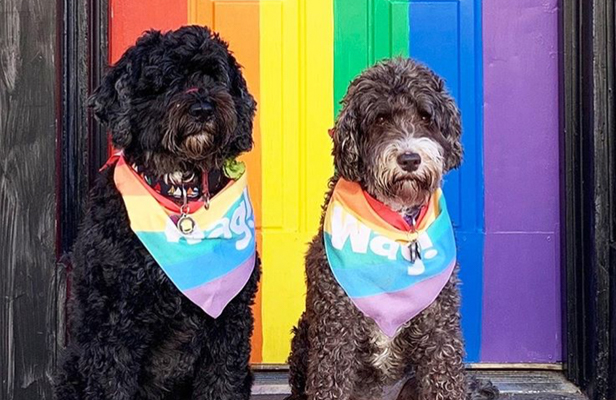 “We’ve definitely seen an increase in Pride projects in general,” says Lauren Cohen, director of marketing for Harper+Scott, which was also one of the 180 companies to sign the recent Don’t Ban Equality letter in support of reproductive rights in the workplace. “Recently, they’ve been centered around the Pride weekend in New York City, but clients have requested more products throughout the year.”

One of Gottlieb’s clients asked for a rush order this year of Pride items, though they ended up not being available for Pride Month because of the tight turnaround. The client went ahead with the order anyway. “They told me, ‘We’re cognizant of our LGBTQIA+ employees, so we want to get the items in and show we support them,” she says. “I thought that was a great message.”

But the sensitive, very human nature of the cause means it’s rife with opportunities for brand missteps, a reality that distributors and their clients should be aware of. Indeed, brands’ presence at this past weekend’s events in New York City, in particular the large-scale parade floats, was met with some controversy. The first-ever Queer Liberation March took place the same day as the Pride March to protest what participants perceive to be its gradual devolution into ostentatious commercialism. Ultimately, they say, it’s a distraction from a very real and ongoing human rights struggle.

Photographer Amy Lombard captured this scene today from the Queer Liberation March and Rally, an alternative march for those who believe pride has become too frivolous and commercial https://t.co/zjL244FrIOpic.twitter.com/oQgOtYTrak

Protestors held signs reading “Capitalism = death” and “Queer liberation, not rainbow capitalism” in response to major brands’ sponsorship of the event, arguing that companies are capitalizing off of those who have long been marginalized.

“I appreciate the help corporations give us now in fighting for our rights,” wrote activist and journalist Ann Northrop, an organizer of the Queer Liberation March, in an Op/Ed for NBC News. “But that doesn’t mean we should turn over the Pride parades to them.”

Despite the controversy, Pride-themed items look to be an expanding product category for promo firms. Lizzz Kritzer, owner of Kritzer Marketing (asi/245947) in New York City, says she’s interested to see where the demand goes this year now that Pride Month has officially concluded, though orders continue to come in. “I’m working on a project now for AUSTIN PRIDE in August,” she says. “We’re doing bandannas, disco ball key rings and handheld flags.”